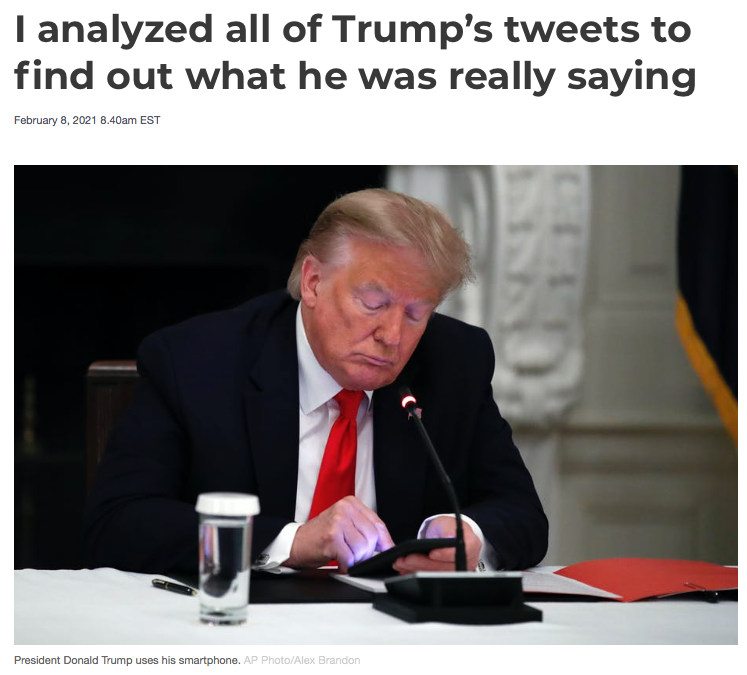 Recently Michael Humphrey, Assistant Professor of Journalism and Media Communication, at Colorado State University published a piece in The Conversation, a generally very well researched publication, backed by academic rigour. Titled “I analyzed all of Trump’s tweets to find out what he was really saying” this article is based on Professor Humphrey’s examination of the tweets Donald Trump made over the course of his recent political life.

The Professor positions Trump as a story teller, a story teller who repeated one story over and over again for five years. Humphrey’s account is thoughtful. It makes you stop. And it makes you think just a bit harder and a little bit longer.

Here’s an excerpt from the article:

The tally was in, it was clear Donald Trump had lost – and he tweeted: “either a new election should take place or … results nullified.”

Trump was just months into his presidential campaign, and was already telling a story he would tell countless times over the following five years, hinting to the world at the character of the man the U.S. Senate will soon evaluate in the impeachment trial.

Back then, Trump was seeking to nullify Ted Cruz’s victory. And he was accusing Iowa of bungling the primary vote counting.

“The State of Iowa should disqualify Ted Cruz from the most recent election on the basis that he cheated – a total fraud!” Trump tweeted.

The Donald Trump Americans think of now was the same Donald Trump who entered the election in 2015 and the White House in 2016. Some of his power to rally a loyal base was based on his repetitive rhetorical style, but on Twitter he was especially potent as narrator-in-chief of his own political life.

In 2017, I began to collect all of his tweets, going back to June 16, 2015, the day he announced his candidacy. I kept at it until Jan. 8, 2021, the day Twitter permanently suspended his account. I wanted to learn more about how he used language. But in those 20,301 tweets I learned something more fundamental about how the 45th president of the United States used Twitter to tell his own story.

However, the main distinction I found was that Trump was among the most frequent users of storytelling methods. Since I am a digital narrative researcher, that intrigued me.

Storytelling in general is common among effective politicians, but Trump’s effort appears to have built a high level of loyalty, diverted attention away from negative topics and generally set the agenda for what the American public was discussing.

Others have looked at this aspect of Trump’s appeal, examining specific storiesthroughout his presidency, his style of storytelling and even the rhetorical components of his populist narrative.

But I discovered a particular story structure that he used the whole time.

Taking closer look is also what I do through my book, as well. The Contrarian Candidate is a book of fiction, in the literary genre of roman à clef. In the setting of a primary debate night, the president is being challenged by a comic turned political opponent. As layers of intrigue mix with a biographically inspired plot, there is much to consider, and lots to think about.

Buy the book, give it a read or two, and send me a review. I look forward to hearing what you think.