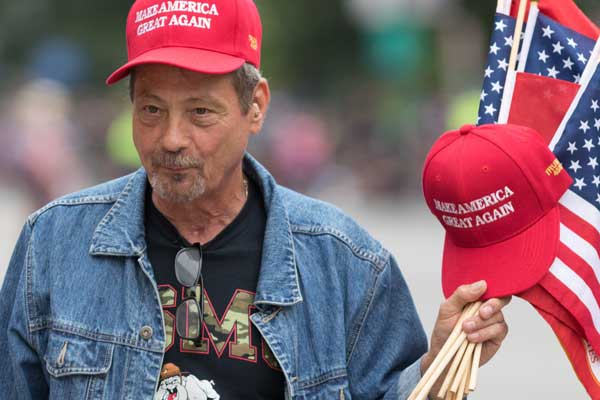 It has become a programming staple, especially on cable news – invite Trump apologists and other supporters onto a panel discussion or one on one interview, with the sole purpose of trashing their idiocy, hypocrisy and lies. In fact that seems to be the only reason to have them on.

And it’s pretty much pre-scripted, or at least predictable. The interviewer knows what these Trumpites are going to say, because they have heard it many times before. And the interviewer knows the surrogate is going to try to filibuster and maintain control of the floor. All of which is made all the easier with the Trumpite being beamed into the studio on a not-entirely-reliable, heavily-delayed, streaming feed.

But the host knows all this going into the interview. So why not have logical and obvious responses at the ready? To see a prime example of how that can be done, look at Chris Wallace’s now famous handling of the president, from his July 19th Sunday morning show on Fox.

Wallace knew what Trump was going to say before he even said it, and as a result was able to tear the man to pieces right before our eyes. Now, I know Wallace has a huge advantage over other TV hosts, in that by appearing on FOX he has no need to bend over backwards so as not to appear anti-Trump. And he certainly knows how to play that to his advantage. That is why most of the best interviews of Trump administration officials have been conducted by him. And they were often as devastating as his take down of Trump himself.

So I can see how hosts on other networks find themselves in a difficult position. But that does not excuse their insistence on taking the easy route and just dismissing Trump surrogates’ assertions out of hand, often talking over them in the process.

But what is most troubling or at least surprising and confounding, is that they often do not have much factual evidence at their immediate disposal – evidence that will back up such an offhanded dismissal, and do it in a way that shows the Trump talking point to be completely without merit.

And what makes that fact somewhat alarming, is that there seems to be more than laziness and time pressure at play here. Because it seems that often one goal, if not the goal, on the part of the interviewer in that type of situation, is to try to prove to their audience that they are on the right side of the issue. And that generally means being on the other side of whatever issue Trump’s minions are spouting that particular day. And that is dangerous.

Because it seems to me the role of the journalist in that situation is to speak truth to power on behalf of the viewer, on behalf of us all. And that was what Wallace was doing with Trump on FOX.

But dismissing the comments of Trump supporters in that way on other networks, is not speaking truth to power. It is pandering to their audience, pandering to their base. It is a wink to their audience saying, “Do not fear, I am one of you.” It is saying, “I get it, I am woke to your feelings about Trump and this supporter of his.” And that is not speaking truth to power, not in that instance, not when it comes to interviews on networks other than FOX News.

But instead the host insists on break in, seemingly to be sure that the Trumpite doesn’t get to make any cogent points. And at times it seems they do that because they do not want their audience to have to think for themselves, or worse, make the audience think the interviewer was complicit in giving this counter-view air time. Because that would look bad for the host. That would mean possibly looking like an apologist for Trump propaganda. And TV hosts do not want there to ever be a whiff of that. They don’t want to sit there and listen, because that might make them seem complicit in the exercise of letting Trump’s views be known.

If Trump’s views are so outlandish, which they usually are, why not just let them spout. Because cutting off his surrogates just gives them added credibility. It makes it seem like the host has something to hide, that there is something they don’t want the public to hear, because it might make Trump’s case.

I’m not saying that Trump’s views should be voiced unopposed. I’m saying interviewers need to be ready with their facts, and in a way that makes them visible to the viewer, actual transcripts of what was said, actual slides or video, whatever it is that can back up the rebuttal.

Now I realize this is not easy for a daily show. Wallace and his team likely spent many days preparing for his Trump interview. And it showed.

But just breaking in and dismissing Trump’s “facts” by shouting over them with your own, only makes the host look like he is offering alternative facts, and that he may not even be listening to what is being said. Or at least that is what it looks like to Trump supporters, including those who are on the fence. “You have your facts, and they have theirs. So who knows what is true?” is what they are likely to be thinking. And to them it looks like the host is just the one who’s being a dick about it. And you can bet whatever encounter results, is going to run on a video loop on FOX News and on social media. So why go there?

So my advice is this: If you are going to have Trump surrogates on, be sure you are prepared. If not, then just listen and afterwards make your point. Also, if you can’t stop them from filibustering then don’t have them on. Because you know that is what they are going to try to do. And in the end, your interruptions just makes them look better, and you look bad – except to your own audience of course. In which case you have once again confirmed your standing within the community, and proven you are on the right side of the issues and a loyal soldier to the cause. Congratulations! You just solidified your base, and at the same time solidified Trump’s.