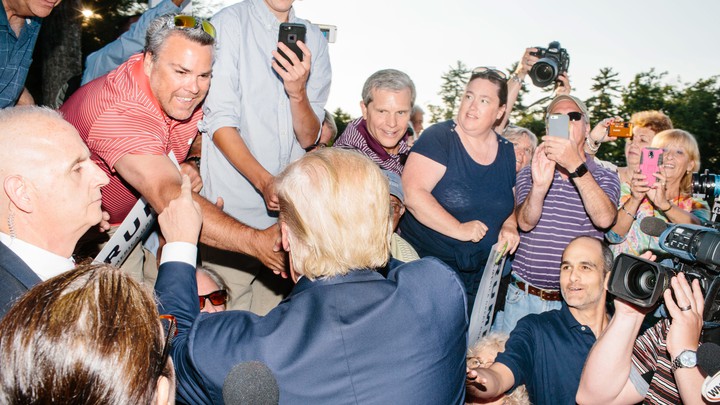 To predict the political trajectory of the American conservative community, it is important to understand how they feel about the Trump presidency, as they look back over the past four+ years. This Atlantic article explores that very topic through interviews with his early supporters. The more we understand polarized views, the better equipped we are to engage in meaningful discussions to find a reasonable path forward.

In the Contrarian Candidate, protagonist Charlie Wyatt stresses the importance of reestablishing a sense of unity in the American electorate. Will early Trump supporters share in that vision?

The former president’s 2015 backers, in their own words

Conor Friedersdorf January 26, 2021, Staff writer at The Atlantic
Now that Donald Trump’s presidency is over, how do the Americans who supported him at the beginning of his political run feel about his performance in the Oval Office? I put that question to 30 men and women who wrote to me in August 2015 to explain their reasons for backing his insurgent candidacy.Among the eight who replied, all in the second week of January, after the storming of the Capitol, some persist in supporting Trump; others have turned against him; still others have lost faith in the whole political system. They do not constitute a representative sample of Trump voters. But their views, rendered in their own words, offer more texture than polls that tell us an approval rating.

Anne Applebaum: Coexistence is the only option

As I did in 2015, I’ll let the Trump voters have their say. But this time I’ll conclude with some thoughts of my own, in my capacity as a Trump critic who knows that Americans have no choice but to coexist, as best we can, because our political and ideological differences are never going away.

Our first correspondent, a communications executive for a hospital, argued in 2015 that Trump was a good choice because he was an authentic leader and negotiator who had run large organizations. He voted for Trump again in 2020. Here is what he’s thinking today:

I’ve been a Republican all my life. I subscribe to conservative values both economically and morally, and the Republican Party has always been my political home. The best way I can sum up the past four years is that Trump made it very hard for someone like me to be a Republican. My life is as close to the American dream as possible. I have been married for almost 20 years to the same woman, I have two boys—one is disabled (autism), but I have the resources to take care of him, and a comfortable middle-class job. I attend a church and generally don’t suffer any real external strife. I’m very fortunate.

There were things about the Trump administration I liked. I was a huge fan of his Supreme Court appointments. I supported his economic policies. COVID-19 has been horrible for the nation, but in assessing Trump’s response, I think he did the best he could and it could have been a lot worse. More than 300,000 Americans dead is a tragedy but the original projections were in the millions, so he must have done something right. [Note: Almost 400,000 had died by the time this was written, and the initial projections had varied; some were as low as 81,000.] I think when the history of Operation Warp Speed is written by disinterested professional historians, it will be remembered in the same manner we remember the Manhattan Project. Maybe Trump will get credit for that, maybe he won’t, but I do think he deserves some.

The problem with Trump is that every time he opens his mouth he says something racist, misogynistic, or, in the past week, downright treasonous that makes me want to crawl under a rock. For the first few years, I would defend his behavior, but eventually I just couldn’t.

The events of this past week by a few thousand protesters egged on by President Trump are a travesty that no reasonable person can excuse. I don’t talk much politics anymore, unless it’s with close friends or relatives. For the first time in my professional life I feel [that] stating my political affiliation would cost me, if not my job, then at least my professional standing with peers. For that reason I ask again that you keep these comments anonymous.

So while I think Trump’s policies were supportable, his rhetoric and personal style was not. Savannah Guthrie actually summed up the problem pretty well when she said, “You are the president of the United States, not someone’s crazy uncle.” I don’t think Trump ever got that.

I think in the long term the country will be fine. We’ve been through a lot as a nation and the arc of history bends toward justice, but in the short term I think Trump’s rhetoric and actions will leave a huge part of the country adrift. The actions of the rioters last week are inexcusable, but what about the millions of people who voted for Trump because they just always check the box marked “R” or agree with him on his policies? Where are they going to go? Will they have a political home? And if they don’t, what happens to our elected body politic?

I am going to be watching the Joe Biden administration closely. I do not think the election was stolen; I think he won fair and square. I had an opportunity to meet Biden when he was doing the Cancer Moonshot at the end of the Obama administration. He has built a political career on two pillars: relationship-building consensus and personal empathy. That’s not exciting to the left who would rather be led by someone like Bernie Sanders or [Alexandria Ocasio-Cortez], but it may be what the country needs right now. And in case you were wondering, I’m not talking about bipartisanship for its own sake. I thought in 2008 and continue to think Barack Obama is a pompous asshole. I don’t feel the same way about Biden.

For the whole article, read the the story in The Atlantic,