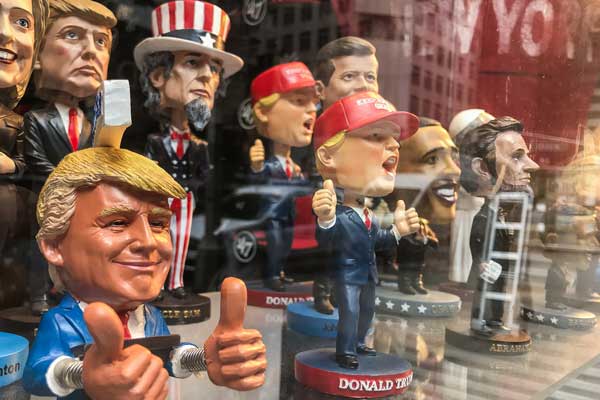 I’ve been dying to use that headline. In fact at one time I wanted to call my book President Trumped. But everyone else thought it was cheesy and just a cheap pun that would lower the image of the book. Personally I don’t care what people think of the title as long as they remember it, and as long as it tells them something interesting and intriguing about the book. To me that’s the point of a title. And it seems to me President Trumped does that. It says the book is about someone who uses Trump’s own tactics to defeat him, and in this case that someone is comedian Charlie Wyatt.

The Contrarian Candidate is a political thriller that is to some extent concerned with conspiracy theories.

As you probably now know, I was eventually talked out of that title by people who seemed to know what they were talking about when it comes to promoting books. And I do love the real title, The Contrarian Candidate. And by the way, the similarity to the novel The Manchurian Candidate is almost entirely titular. Although, like The Manchurian Candidate, The Contrarian Candidate is a political thriller that is to some extent concerned with conspiracy theories. But in the Contrarian’s case, it’s about debunking those theories and showing how dangerous they can be, especially in the current political climate.

Also, that is not the central focus of my book. What the book really sets out to do is to tell the story of would happen if a standup comic ran against Trump in the 2020 election, not to win necessarily, but just so he could beat him at his own game – in other words belittle, berate and verbally beat him to a pulp every chance he gets and in every possible way. Which makes candidate Charlie Wyatt, Trump’s worst nightmare and the troll from hell.

But enough about my book. What I really wanted to talk about here is what it’s been like these past few weeks as my book is about to be unleashed upon the world. In a word it has been hell. And it isn’t just disagreements about titles and other creative and business issues. It’s been everything to do with the process. And I’m starting to believe that may not be entirely because of the process itself, but because of what it means for me in terms of having my book out there.

Bartholomew St. James is not my real name

You may or may not know it, but Bartholomew St. James is not my real name. And there are a lot of reasons I decided to use a pen name, and they don’t really have anything to do with the controversial subject matter of my book. It’s more about how I see authors in general, at least in terms of my own reading experience.

Obviously I like having my words and ideas out there. Which is the reason I wrote the book and am writing this blog. Nothing new there, especially for a writer. But at the same time, I see no point in readers knowing me personally, at least in terms of my physical attributes, like what I look like and the sound of my voice. In fact to me as a reader, that is a distraction.

But the fact is, it is me. And so that is how I want my book to be seen and heard – as a statement of who I am on the inside – which is one reason I like the title The Contrarian Candidate so much. The title itself is a statement of who I am, not the candidate part of it, though I guess if I thought about it long enough, I could see how I am a candidate for something, in some way.

that is who I am, the ultimate contrarian

What I’m talking about though is the contrarian part. Because that is who I am, the ultimate contrarian. And that stems primarily from the fact that I do not feel any real connection to the world – at least not as I see it. All of which makes me feel as if I am looking around at that world, and seeing it in a rather unique and objective way. The way I see it, I’m just calling balls and strikes, as they say in the legal profession (and in baseball too, come to think of it.)

As far as my politics, I like to think I’m on the progressive side of things, and therefore, in my view, on the right side of history. But that does not mean I buy into the totality of the progressive agenda, certainly not in terms of their ability to carry out their goals. In fact I see them as being very ineffective in that regard. So to a large extent, that is what this blog is going to be about.

After all, if it was just about trashing Trump, that would get pretty repetitive and boring. Besides, who am I to compete with the late-night shows, each with their dozens of writers.

There may be a fire hose of source material coming at us, in the form of one stupid statement and idiotic move after another. But how many creative ways are there to respond to all that minutia in a way that expresses the enormity of it all. And that is what I am interested in, the enormity of it, the big picture, the thirty thousand foot view. That’s what interests me and what this blog and The Contrarian Candidate are really all about.