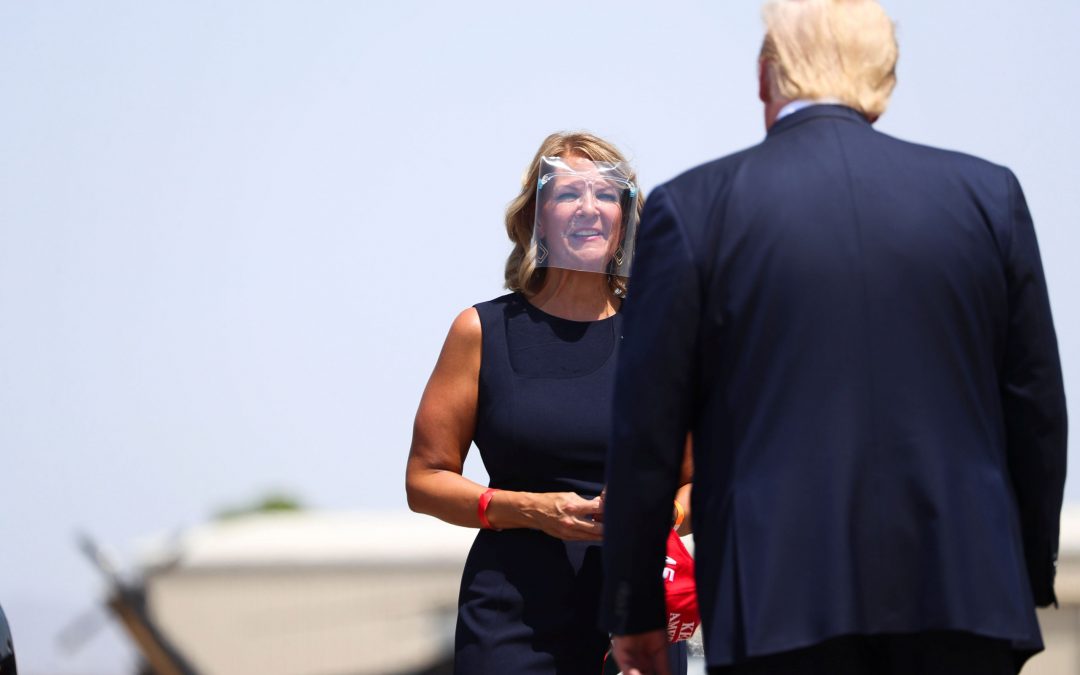 This article from the New Yorker explores the tenacity of Trump’s Big Lie, through his base and state political surrogates like Kelli Ward.

You will also enjoy the intrigue behind the podium in the novel The Contrarian Candidate. The fictionalized story takes place on an evening of the Republican Primary debate in which the protagonist, Charlie Wyatt, challenges the sitting President in a debate about values.

A few days after Joe Biden’s Inauguration, Donald Trump made his first post-Presidency endorsement of a Republican candidate, in a four-way race to chair the Arizona Republican Party. Trump offered his “complete and total” endorsement to Kelli Ward, a physician and twice-failed U.S. Senate candidate, who has vigorously promoted Trump’s Big Lie about election fraud. (On January 6th, as the attack on the U.S. Capitol unfolded, Ward tweeted, “Send the elector choice back to the legislatures,” as the President and his advisers had urged Vice-President Mike Pence to do, so that the ballots cast by voters could be nullified and Trump restored to power.) On January 23rd, at an assembly of state Republican Party members in a Phoenix church, Ward prevailed. “I’ve been told by a couple of national radio hosts that the lobbyists, the slime, the consultants in Washington, D.C. thought they were finally going to be rid of me, that they were finally going to be rid of Trump,” Ward said, in a video message posted on Twitter after her win. “Well, I’ve got news for you, folks: I’m still here.”

In the early days of the struggle within the Republican Party over Trump’s influence and the salience of his Big Lie to the Party’s future—and to the health of American democracy—a split-screen picture has emerged. In Washington, Trumpism is under pressure; on the eve of the former President’s second impeachment trial, Democrats are preparing a clear, visual, and emotive casethat they hope will lay down an indelible record of how his lies about the election mobilized the January 6th assault. Meanwhile, at the Federal Bureau of Investigation and at Justice Department headquarters, on Pennsylvania Avenue, agents and prosecutors are identifying and indicting conspirators and lone rioters in the attack.

But, in diverse states and counties where many of the approximately half of Republicans who continue to believe that Biden stole the Presidency reside, Trump’s followers are advancing the antidemocratic radicalism of his last months in office without comparable accountability. They are directly attacking voting laws and systems, which are generally administered at the state and local level, by normalizing the Big Lie as a justification for extraordinary, if not extralegal, resistance.

Already, according to the Brennan Center for Justice, state legislators have moved forward with more than a hundred new laws that would restrict voting, three times as many as a year ago. In Arizona, Kelli Ward has joined multiple lawsuits challenging the November Presidential vote in her state, where Biden’s victory was certified by the Republican governor, Doug Ducey, and the Democratic secretary of state, Katie Hobbs. (After posting a video echoing conspiracy theories that machines made by Dominion Voting Systems were involved in fraud, Ward recently received a cease-and-desist letter from the company. Dominion has filed a $1.3-billion defamation suit against Rudy Giuliani, among other legal actions.)

In Pennsylvania, Republican legislators on the House State Government Committee have launched a fourteen-hearing “deep dive,” as the committee chair, Seth Grove, put it, into state and county voting procedures. After just the second hearing, Grove declared that a central mechanism of Pennsylvania’s recent mail-in voting system—one that allows voters to sign up to receive applications for mail ballots automatically—had been exposed as “a huge problem,” presaging a Republican effort to roll back such measures. In Georgia, Republicans are proposing to end automatic voter registration, ballot dropboxes, and no-excuse absentee voting.

Ryan Costello, a former Republican congressman from Pennsylvania and a Trump skeptic, who is considering a run to replace Senator Pat Toomey, who is retiring in 2022, told the Philadelphia Inquirer last week, “Both due to the way Trump governed—which was requiring complete submissive allegiance—as well as the base of the party accepting a cult of personality, there’s going to be those that wish to continue down that path.” Indeed, the poison spreading from Trump and his amplifiers in far-right media is likely to destabilize the country at least until the next Presidential election, as Trump continues to test the country’s appetite for fanaticism and autocracy, and his adherents reckon with their own delusions.

The prospect is not only that credulous or opportunistic Republicans will exploit the Big Lie in order to press their long-standing efforts to restrict voting at the state level. The fever dreams expressed in Trump’s post-November lawsuits and his interference with the administration of the election in the states—for example, his radical assertion that state legislatures could overturn election results in battleground states, including Georgia, Michigan and Pennsylvania—may now evolve into a more general undermining of law and constitutional jurisprudence. That process could resemble what has happened in recent years in polarized, notionally democratic but increasingly authoritarian countries, such as Hungary and Poland.

In a revelatory reconstruction of Trump’s seventy-seven-day effort to overturn the November vote, the Times recounted how eighteen Republican attorneys general signed onto a meritless, “audacious” lawsuit before the U.S. Supreme Court, brought by Ken Paxton, the attorney general of Texas, to challenge election results in battleground states that Biden won. A hundred and twenty-six Republicans in the U.S. House of Representatives also endorsed the suit, which the Court readily dismissed. A standard reading of the episode is that it shows the residual, intimidating power that Trump and his electorate have exerted over elected Republican politicians, as well as the supine character of many Republican officeholders. Another reading would be that the chief law-enforcement officers of eighteen states embraced the Big Lie, advocated unconstitutional means to address its fantasies, and now face no prospect of accountability. That is a poor portent for efforts to re-legitimize nonpartisan electoral integrity.

The hard reality is that American democracy is in the midst of a prolonged decline; in the latest annual rankings of “global freedom” published by Freedom House, the U.S. has fallen below Mauritius, Latvia, Greece, and Slovakia, landing just above Argentina and Mongolia. It is not always easy to discern what is cause and what is symptom, but—even before Trump arrived to trash the Constitution—rising inequality, underregulated social media, demagogic right-wing media, complacent and self-involved liberalism, white backlash against racial-justice movements, the distortions of the Electoral College, and a Congress too divided to take on difficult problems had all weakened the country.

The Big Lie about the November election was born of Trump’s narcissism and cynicism. During the next two to four years, it may buoy a Trump comeback attempt, or at least extend his influence in the Republican Party. But it may also do great damage in states and localities where many voters have lost trust in elections. Officials like Kelli Ward—“still here” and newly empowered—can be expected, judging from their records to date, to embrace Trumpian vandalism against election administration and law, while refining litigation strategies to appeal more effectively to Trump sympathizers in the courts.

The manipulation of elections by antidemocratic leaders, even as they claim to defend democracy, is the new, subtle playbook of global authoritarians, as the political scientists Nic Cheeseman and Brian Klaas document in their 2018 book, “How to Rig an Election,” which surveyed voting manipulation in dozens of countries outside the United States. “The greatest political paradox of our time,” the authors wrote, is that “there are more elections than ever before, and yet the world is becoming less democratic.” Just as Trump’s election in 2016 was a trailing indicator of the rise of right-wing populism in troubled democracies abroad, so may post-Trump America be a bellwether of the patterns that Cheeseman and Klaas identify, in which local Trumpians across the country slowly acquire power not by staging provocative dramas, like the one on January 6th, but by bending elections, intimidating civil servants, and winning over judges, without ever abandoning a pretense of faith in democracy. Trump may have improvised his Big Lie while in an unhinged state of rage, but many of his followers remain determined to forge from it a potent plan of action.