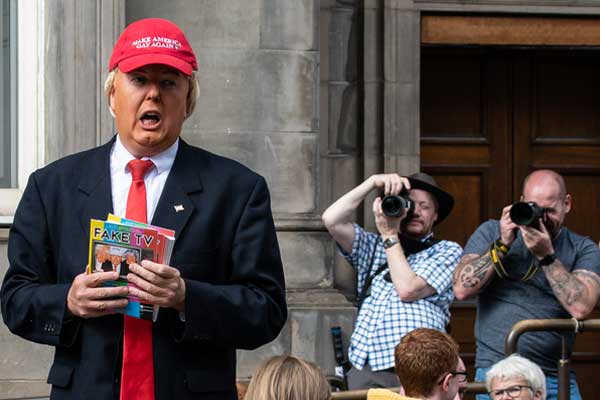 It started out as a bit of wishful thinking, and a thought experiment of sorts: What would happen if a political comedian challenged Trump in the presidential race – and did it for real? The goal would not be to win of course, but just to use his comedic skills to trump Trump, in a sense, by doing to him what Trump has done throughout his life – belittle, berate and verbally beat to a pulp anyone who gets in his way.

And it might even work politically, I thought, given that a comedic attack might be the only way to effectively neutralize Trump’s attack mode barbs – his one rhetorical tool and his one real advantage over the politicians he’s faced.

But after thinking about it for a few days, and asking anyone who would listen, “Why doesn’t somebody actually do this,” I suddenly thought to myself, “Wait a minute, why shouldn’t I do it – not for real of course, but in a novel.” And long story short, a few weeks later I began to write.

But before long I started to see obstacles to my plan. The first was the realization that I could not actually use Trump as an on-screen (so to speak) character, or even use his name. Well duhhh, who would have thought?

But oddly enough, that did not turn out to be nearly the obstacle I anticipated. In fact I think it may have been one of the prime reasons my story worked as well as it did.

I see it as similar to what happened with the movie Jaws. Many critics believe one of the reasons that movie turned out to be so frightening, was that the mechanical shark did not work very well, and couldn’t be used in most of the scenes. So we were left with only that chilling dunt-duh music to warn us that the hungry beast was on the prowl.

… the things he says and does, makes him seem more ridiculous, even to the point of appearing comical at times.

But in the case of The Contrarian Candidate, rather than making Trump seem scarier, I think the fact that we only hear about the things he says and does, makes him seem more ridiculous, even to the point of appearing comical at times. And perhaps more importantly, it allows us to look at the forces that surround him, in a deeper, more objective way – because our thoughts and feelings about Trump the man, are not as likely to get in the way.

I’m not sure what that says about Trump, or the book I wrote about him. But either way, that was just the start of what I learned from writing my novel and telling that story.

I also learned what we have all been learning during the current political season, that there is no point in arguing the facts with Trump, or getting into any kind of logical, rational debate on the issues. It just doesn’t work with him. And there is no way to use that approach to gain a real advantage. To me debating him in that way, is akin to trying to discuss astrophysics with at two year old. In the end it inevitably degenerates into a frustrating pile of nonsense.

But perhaps the most important and enduring lesson I learned from writing the book, resulted from the evolution of the contrarian candidate himself, Charlie Wyatt. In the beginning I thought of him much the way I think of reformed smokers, or new adherents to an important cause. They are generally much more strident in their views on the subject, than those who have been with it for awhile.

So that is how Charlie started out in my mind, with my thinking going something like this, “He’s a Republican. So he voted for Trump, but quickly saw the error of his ways, therefore becoming stridently anti-Trump in his comedy and in his life.”

But along the way I began to see the limits to that characterization, as well as its downside. After all, the purpose of the book was not just to take my pound of flesh for what Trump has done to our world over the past four years.

What the book ultimately had to be about, was finding a way to get safely past Trump and the whole sorry mess he’s created.

Which meant the book couldn’t just be about belittling him in every possible way – as much fun as that was to do. No. There had to be much more to the book than that. In fact what it ultimately had to be about, was getting through a truly horrible episode in the country’s history, by finding a way to get safely past Trump and the whole sorry mess he’s created. And ridicule didn’t really seem to do that very effectively, certainly not on its own.

And the more I thought about that, the more I began to realize that piling on the way Charlie was prone to do, had in fact been part of the reason for Trump’s electoral success. Which made me realize that if I was going to break through the clutter and get to the real issues at hand, I was going to need to stop being so antagonistic in how I saw him – or at least his supporters. Because that narrow, partisan view I’d been holding of them hadn’t gotten me anywhere, in part because it didn’t really help explain anything about what had happened to the country. So I realized I needed to see Trump’s supporters in a different, less partisan light. Or better still, see them in a non-partisan light if possible. And I found I was able to do that through the character of Charlie Wyatt himself.

Because as it turns out, Charlie was born and raised in a small mill town in the heart of Trump country. And as such, his story took me on a journey from his small town roots, to voting for Trump, to waking up with a massive hangover the day after the 2016 election. And I soon realized that it was his finding out that Trump had actually won, that in a sense scared Charlie straight. That is what led him to not only reject Trump, but to straightening out his life as a whole.

The political elite did nothing to change Charlie’s view of Trump. In fact in the end, they practically forced him and those like him, into voting for the man.

And it was only after finding my way to the heart of Charlie’s story, that I gained some understanding of where his vote had come from. And in the process, I began to see how the political elite and others in positions of power, including the media, had done nothing to change Charlie’s view of Trump. In fact in the end, they had practically forced him and those like him, into voting for the man.

And by the end of the book, Charlie had shown me that the best, and perhaps only way to reverse that trend and defeat Trump, was for those like me to quit seeing him in such a partisan light, in fact quit seeing the world as a whole in such partisan terms. And while that may not seem very appealing to those of us who look upon our partisanship as an important form of self-expression, and look at politics in general as a form of entertainment, it is absolutely critical in seeing our way through to a post-Trump world.

And there again, Charlie was able to help me. Because he sees our ability to end hyper-partisanship, in much the way he sees recovery from addiction. In part that’s because that is what he’s been dealing with over the previous three years – all thanks to that massive hangover the morning after the election.

… hyper-partisanship as a powerful addiction, one that forces us to see everything through a partisan lens.

So like his struggle with drugs, Charlie sees our hyper-partisanship as a powerful addiction, one that forces us to see everything through a partisan lens. And as a result, it forces us to demonize everyone who is on the other side, and in some cases even those who are on our side, but are not seen as being partisan enough for us.

In the end Charlie and the rest of the characters in the story are able to show how badly that is working for us. In fact they show us that little by little it is destroying us all, destroying our institutions and our faith in them, destroying our country and our relationships with other countries in the world. In short, it is destroying everything we see around us.

But all is not lost, as you will hopefully see as we explore the other lessons learned while writing this book, along with many other aspects of the coming election. And in the process, hopefully we can have a little fun along the way – at Trump’s expense of course – if only as a way of getting through the weeks and months that lie ahead.

Next: Part II – Trump is just a sideshow